The African People’s Socialist Party has held 12 World Tribunals on Reparations for African People, the first occurring in 1982 and the most recent in 2003. Explore the coverage and documents from these historic tribunals.

Coverage of the tribunals in books and The Burning Spear newspaper

Purchase a piece of history!

Get a reproduction of the front page of the December 1982 issue of The Burning Spear newspaper featuring coverage of the First International Tribunal on Reparations for Black People.

The African People’s Socialist Party founded ANRO as a mass organization to forward the struggle for reparations.

Read from an excerpt of the ANRO Constitution and By-Laws >> 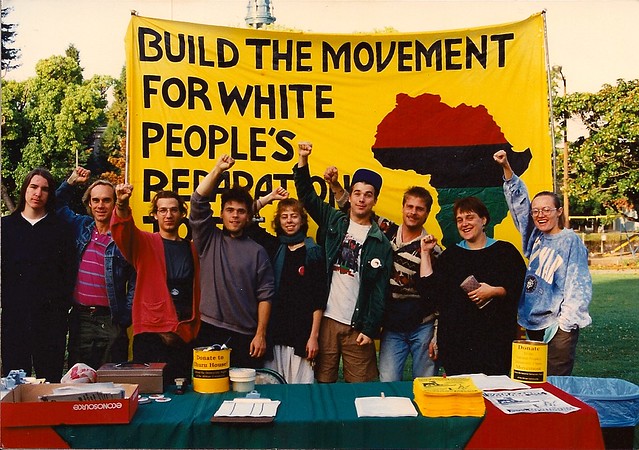 In 1976, the African People’s Socialist Party created the African People’s Solidarity Committee. This organization open to white and other non-African people is accountable to and works under the direct leadership of the APSP. It’s mission is to organize white reparations to African people; material solidarity from the white community and institutions to support the APSP’s campaigns and programs for African self-determination and national liberation.

Black is Back Coalition for Social Justice, Peace and Reparations

The Party founded the Black is Back Coalition for Social Justice, Peace and Reparations in 2009, following the election of Barack Obama as U.S. president. The Coalition is an organization of organizations fighting against imperialism in all of its manifestations such colonialism, neocolonialism, zionism, military occupation, proxy wars, economic embargoes and trade restrictions and that recognizes that there is an undeclared war devastating African people in the U.S.

The BIBC holds an annual electoral campaign school as well as an annual conference and march on the White House.

Reparations. We demand reparations consistent with international norms regarding redress for crimes against humanity. This includes the enslavement, colonialism and apartheid from which we suffer up to today. The totality of the repair, according to international law, must include policies, programs and projects that cease ongoing racial crimes; offer restitution and return us to wholeness; provide compensation that allows for a quality standard of life as well as individual and collective wealth creation; ensure satisfaction that returns our dignity and achieves rehabilitation for the heart, mind, body and spirit injuries resulting from the centuries of trauma and abuse.

At the 2001 United Nations-sponsored World Conference Against Racism the great majority of the world’s countries gave their support for the demand for reparations, declaring that the enslavement and colonization of African people by Europe and America was a crime against humanity.

The African People’s Socialist Party’s tribunals on reparations for African people were based upon international laws including the U.N. Human Rights Charter and the Convention on the Prevention and Punishment of the Crime of Genocide.

Chimurenga Waller, who was President of the International People’s Democratic Uhuru Movement at the time and who attended the World Conference Against Racism said, “400 years is too long to owe anybody anything! African people demand our human rights to self-determination and reparations under international law.”

The United Nations’ working group of experts on people of African descent carried out a four-city, fact-finding tour throughout the United States from January 19 to 29, 2016, with visits to Jackson, Mississippi; Chicago, Illinois; New York City, New York; and Washington, D.C.

The working group consisted of Ricardo Sunga, Sabelo Gumedze and Mirielle Fanon Mendes-France.According to Mireille Fanon Mendes-France—the daughter of deceased revolutionary scholar and psychiatrist Frantz Fanon and head of the panel—the working group set out to “gather first-hand information about the current human rights situation of African-Americans, and follow up on the recommendations to fight racism we made during our last visit to the country in 2010.”

During each city visit the working group heard from a host of non-governmental organizations, activists, lawyers, elected officials, and the like. The African working class was, however, noticeably absent from the discussions.

Kalambayi Andenet, President of the International People’s Democratic Uhuru Movement (InPDUM), led the #AfricansChargeGenocide Winter Encampment Tour, which worked to push the Africans Charge Genocide Petition in each city and to raise the demands of the African working class before the panel.

In 2017, the Party fielded two candidates in an electoral campaign in St. Petersburg, FL—one for city council and the other for mayor. The Party’s candidate for the District 6 city council seat was Akilé Anai. Our mayoral candidate was Jesse Nevel from the African People’s Solidarity Committee.

In a six-month campaign that lasted from March through August our candidates forced the issue of reparations to African people onto the electoral ballot and the consciousness of the city’s population. Millions of people throughout the U.S. are unfamiliar with the reparations demand. Within six months we made it a popular issue precisely because it was on the electoral ballot, the primary means by which political ideas achieve legitimacy for most people within the U.S. prison of nations.

Despite the fact that the African population of St. Petersburg comprises only 23 percent of the total population, our candidates electrified all the electoral debates. On one occasion they led hundreds of white people in a march through downtown St. Petersburg chanting, “Unity through Reparations!” and expressing solidarity with black power under the leadership of the African working class!

This has never happened in the history of the colonial domination of our people in the U.S. or in the world for that matter.

Although we did not win the election, we built a powerful movement based in the African working class of St. Petersburg. We created the foundation for winning numerous reparations elections in the future by forming the vibrant precinct-based organization Communities United for Reparations and Economic Development (C.U.R.E.D.) led by Akilé Anai and Jesse Nevel.